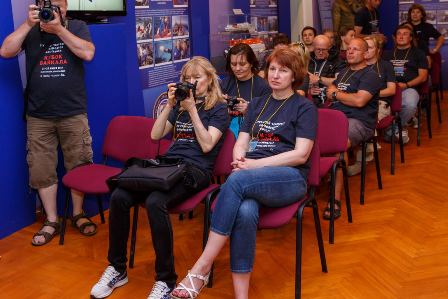 On June 21-25, 2017 Listvyanka settlement (Irkutsk region, Lake Baikal) hosted Open Championship of Underwater Photography Lake Baikal Cup. Suchlike competitions were last held in the Baikal in 1980th (1985, 1987 and 1989), so the event served as a sort of revival of a forgotten tradition.

The competition opening ceremony took place in The Baikal Museum with an exhibition of retro-photographs (made by one of the participants of the first competitions Lake Baikal Cup, Sergey Glushenko (Ukraine)) in the background.

During the 4 days of the competition there were about 30 people underwater, 15 of whom are professional and beginner photographers from Irkutsk, Ulan-Ude, Moscow, Sverdlovsk region, Tyumen city and the Czech Republic. The participants competed in the major nominations: Underwater Landscape, The Man and The Baikal, Lake Baikal Macro, Lake Baikal Art as well as in our partners’ special nominations.

During the championship all diving arrangements were made by dive-centre BaikalTek with a great support provided by Limnological Institute divers’ group, dive-centre Sval, The Baikal Museum. Dives in the framework of the competition were made in three dive-areas of the Baikal (Listvyanka, Circum-Baikal Railway, Bolshiye Koty) and all the participants took turns diving in each area, which created equal opportunities for all.

We used The Baikal Museum boat Professor Treskov as our dive boat. Vladimir Fialkov - the Head of The Baikal Museum - was one of the organizers and participants of the competitions held in 1980th and for him personally our present-day competition was a symbol of time link.

Apart from the photographer-participants there were volunteers (BaikalTek divers) - guides and models underwater. It should be noted, that the competition participants were greatly assisted by BaikalTek volunteers.

It proved to be hard time for the jury, as each of them had to choose a photo/photos,  corresponding with the nomination the partners proposed. Sometimes the opinions coincided and one picture was chosen by different partners. Over 200 competition pictures were examined by the jury.

Winners in our partners’ special nominations:

Živa Lípová (the Czech Republic) - certificate for 2 people - a 5 days’ trip to Kabanskiy Sanctuary, the bird kingdom in the valley of the Selenga River

«Eutrophication and Its Consequences» from Limnological Institute

The Man and The Baikal

The closing ceremony and presentation of awards to the winners took place  in a conference hall of The Baikal Museum. David Pilosof - one of the members of the international jury - greeted everybody via an Internet-channel and pointed it out, that the participants’ professional level and the quality photos under examination equal to those at prestigious international competitions, despite the severe dive conditions in the cold waters of Lake Baikal.

The representatives of all partners of the competition took part in the awarding ceremony personally. The festive occasion finished in the exhibition hall of the Museum.

Following the idea of Andrey Sidorov (the competition winner) it was decided to keep The Cup at The Baikal Museum and declare it a challenge cup.

With support from: Irkutsk District Administration, Lake Baikal Rescue Brigade of Ministry of Emergencies of Russia.