Diagnostics Sea of Soul and Karma.

Diagnostics Sea of Soul and Karma.

I was like everyone else,
Drank and worked in fields.
I have read Dao De Jing
And have understood: “I got caught!”
I have burned my penthouse,
I have checked the vines
And I got out to dance
In the fog over Yatszy.

You probably know that there are places on planet Earth, where you can’t get in simply; you can’t get there just by paying money and getting a plane-ticket. Obviously, you can physically move your body from point A to point B, but you won’t be able to see the most important thing that is hidden in that place. Some people call it energy, others call it soul, and yet others call it esotericism. However, the name here is not important. The importance is in the existence of that something; in ability to feel it, to touch it, to fill self up with it and become at least a little bit cleaner and better.
There are a lot of places like this: Tibet, Mexico, Altai, Kamchatka, Plutorana Plato, Perm’s anomaly zone. People try to get there, and everybody is looking for something special: inspiration, relaxation, calmness, or realization.
Baikal is one of such places. Each year dozens of thousands people dream to come here; thousands actually come, and everybody finds something special. Some leave without finding anything; they just leave, without understanding anything. I am not sure, perhaps, it depends on karma whether you will understand or you won’t… 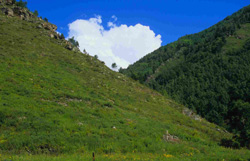 My long-time dream came true this year: I have visited this mysterious place. Irkutsk seemed low after Moscow, as a patch of grass in woods. It has amazed me with the magnificence of Silver Century and poses. It is located in seismographically dangerous zone; it doesn’t have buildings taller than 4 floors. It is craved from wooden houses, with little yards, where people dry their laundry or park their Japanese cars. Those yards are really clean; they have swings and monkey-bars in them for children. Poz-cafés (these are cafes where one can eat pozes – Buryat’s ravioli) seem like places where one can meditate.
My walk around town turned out long, and when I finally reached Angara’s waterfront it was already evening. It was sunset; sun was mirroring in calm water. All around you there were people celebrating weddings. They walked towards restaurants, and they were followed by birds.
It’s morning now. Listvyanka. Holy Sea. We’re bringing tanks with helium aboard. In this safari Gennady Misan will be teaching a class on Advansed Trimix Diver TDI for his two students.

There is a ritual that is followed by all at Baikal - giving to Burhan idol, towards all four sides of the world. On the right there is Baikal Mountain chain, on the left – Hamar Daban, which is so loved by Yuri Vizbor. Through the fog we can see the opposite shore; it is 80 kilometers away. The clouds fly along the shore, very-very low.
Baikal is indeed a sea, but it is different – it is simple and clear, without meanness. On the other hand, maybe we just got lucky with weather. We’re heading towards Bolshie Koty, towards Round Baikal Railway. We’re assured by Gena Misan, that’s there crashed a train with Kolchak’s gold. Our goal is to find it. I don’t know about the chests with gold, but you can easily see the train-cars from that time on the mountain slopes.
Majority of dive sites at Baikal follow this pattern: wall, step, wall, step – going down all the way to the very bottom.

However, there are also under-water Mountains with peaks, cracks, and valleys. Some of the walls are huge – going down to 100 meters.So, Gena have already dived to 150 meters at that place with train-cars. He saw more train cars, but he haven’t found the gold yet; it lays deeper.
Most of all I want to see arhats, who according to Buryat’s, seat in the caves on the bottom of Baikal, and wait for the come back of Buddha-Maytrayi.
The water looks emerald. Everything is amazingly relaxed and light. Nobody runs anywhere and there is now feeling that you are trapped preparing for war and you have to catch every moment of rest. There is no set time to get up. Diving is not hurried and it is thoughtful. There is always time to look around and enjoy the landscape. Red cliffs carry pines, as though the surrounding landscape was created by the master of feng shui. Clouds still hover over the opposite shore, and you can imagine train in them, train that carries Kolchak’s gold.

Clouds fly by...
How carefully
They carry mountains on them! 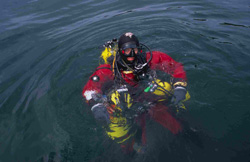 At most I am amazed by people who live in such unbelievable places. It was the same in Mexico and at Altai. Probably, the closeness to the soul-center helps their character. These people surrounded me entire trip: kind, nice, and simple. These people are far from Moscow’s rumors and intrigues; they dive in one-degree water down to 100 meters, and they do it calmly and easily, as though there is nothing heroic in it. Here they plan recreational and technical safaris or shore-diving.

“BaikalTek” has two ships, and there is an opportunity to find a program of any level. You can learn technical diving; thankfully, depths are appropriate. All the specific equipment adjustments, in order to dive in cold water, are thought through. One-degree is incomparable to Hurgada. Here in dry suit everything would be frozen.
I am not going to go over all the dive-sites, their description can be found on www.baikaldiving.ru. I am just going to remind that Baikal – is indeed a Sea. There is space and might under water. Baikal divers say: “What’s above water - is under water as well”. It is enough to look at the shores and realize a bit of what the under-water is like. Landscapes are alike. The typical view is cliffs, walls, amphitheatres, cracks, giant “fingers”. Living things include fish and sponge – green coral on yellow sand that raises its branches to the unfriendly northern sun.
Gamarus. This inhabitant deserves separate story. It’s not the same one that you would see in the aquarium in school. It’s an alien from another planet – 10 centimeters long and armed up to the teeth. When I first saw this marvelous creature I started to signal to all the participants of the dive how excited I was. I couldn’t understand why local divers don’t get as excited as I did. I got it after we ran into a whole bunch of them – probably several thousands.

Diver moves his flippers...
But it seems, that he is still
In Baikal’s fogginess.

Everyone can come to Baikal and dive. It’s not that difficult. You buy a ticket, get on the plane, hour-long car ride, and you’re at Baikal. It’s difficult to let Baikal in you, accept it; fall in love with its cold and selfish nature. To fall in love with it and see, what Baikal is for real – gentle and lovely sea. Gena Misan has fallen in love with it like that and a lot of divers did too, they come back again and again, They were able to see the soul, the energy, the esotericism (call it whatever you want) of this place and find here what most of the people are looking for. However, some leave without finding anything; they just leave, without understanding anything. I am not sure, perhaps, it depends on karma whether you will understand or you won’t… 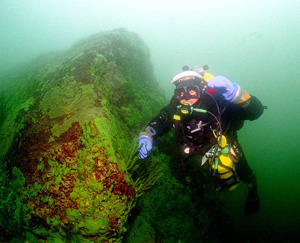 I know now for sure: there is a magical sea in Siberia. It is for karma diagnostics - the best in the world.
My great thanks go to Gennady Misan and Tatyana Oparina for their conversations and help in organization of filming.